You land on a strange planet which is…made of hexagons?

You’ve been sent by MININGMANCORP to mine crystals for like, profit or something? You’re not sure if that’s such a good idea though – mining seems to hurt the planet, buuuuut Commander Randy keeps yelling at you soooooo…

INTERACT with the flora and fauna (including a sacred ALPACA!)

MINE for fuel so you don’t die, and MINE for crystals because you’ve been told to – or maybe don’t? Your call.

ESCAPE with your life by getting back to your ship with your haul!

Wow, this is excellent! The dialogue was great, particularly Commander Randy's constant derisions. The random events added a lot of fun to the game and kept things really interesting. I ran into a few events that gave me a game over, was that due to my previous actions or were they random? This is a really great game, well done!

Thanks for playing! We're really glad you enjoyed destroying our peaceful little planet for fun. The post mortem report suggested that too many giant drill-shaped holes in the planet were the cause of death. Personally, I don't really buy into that science voodoo; I just think the planet was just weak and probably gave up too easily.

Some events are scripted (an alien always appear to great you with a crystal reception - we are starting to suspect he might actually be their Head of Planetary Tourism) and the rest are randomised, but some events and actions unlock others. Running out of fuel or maxing our your ecology meter will trigger events and usually a slow and painful death shortly after.

Legends say that if both you and the planet can survive long enough and you pay your crystal tribute in Esteban's cave, you might be graced with a visit from the Holy One. But I'm sure you know that legends are usually just liberal propaganda. Anyway, nice talking to you but I gotta get back to drilling me some crystals before the boss shouts at me some more.

Really enjoyed it!!! Sound design and writing was on point! The drilling a tad confusing but everything else flowed very naturally :-)

This was actually quite fun to play! I love the interactions with the world and it isn't difficult to make my way around. The game is easy to grasp even though the drilling took some time to figure out. Great work! 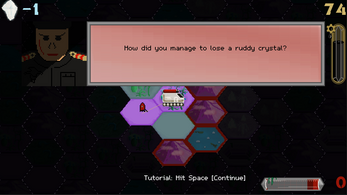 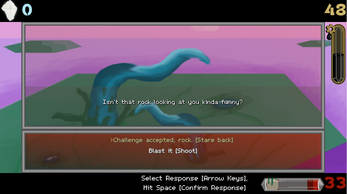 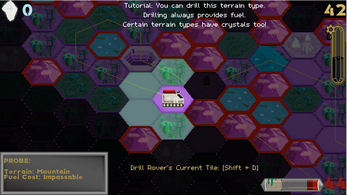 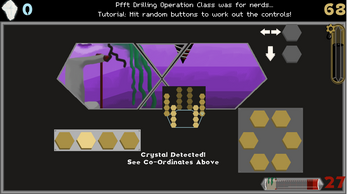 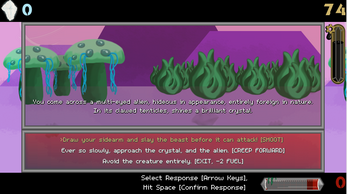